The King of Winter “Hokki-gai” 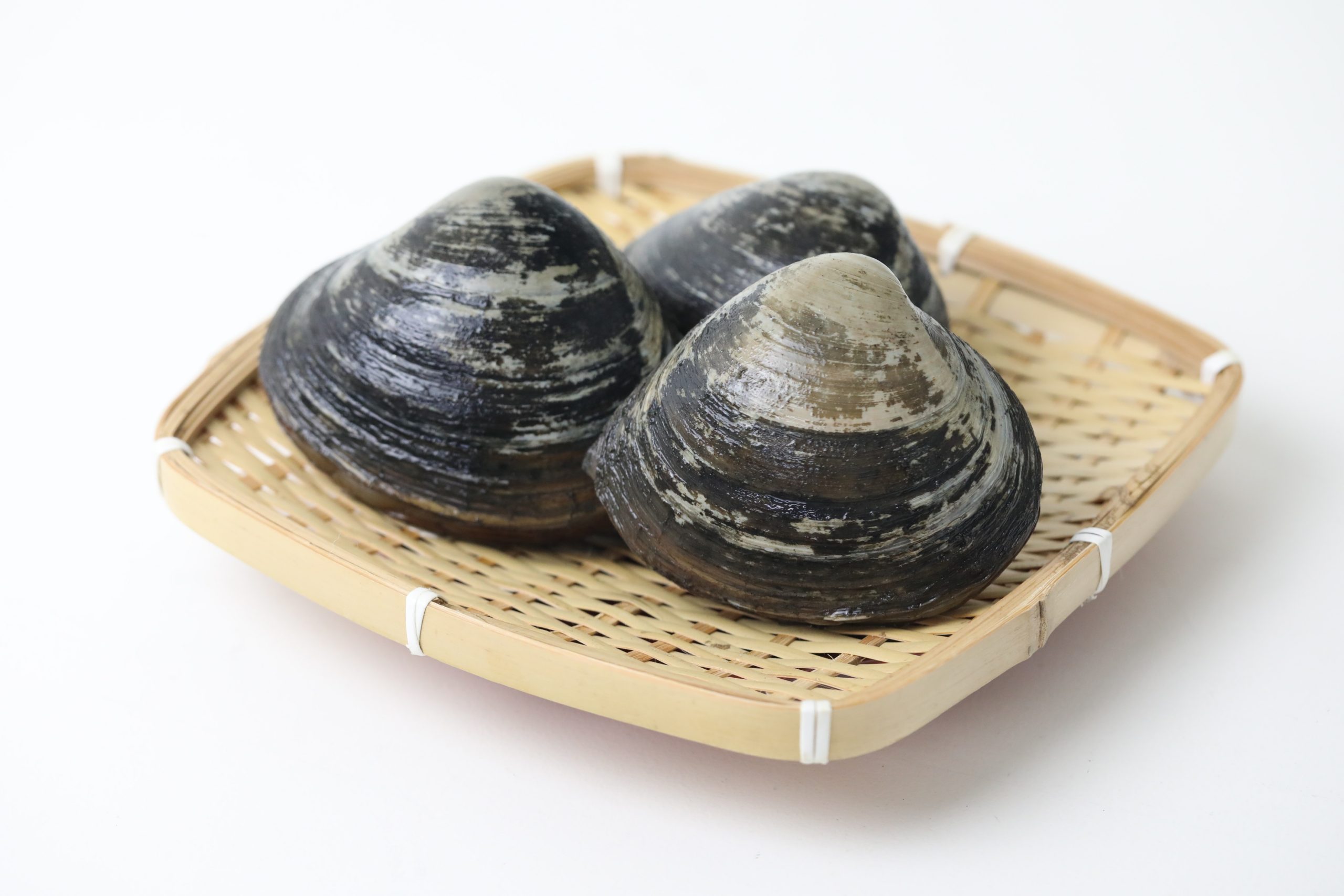 The Kitahama area (off the coast of Misawa and Hachinohe) is the main producing area of Hokki-gai, or surf clam, in Aomori. During the fishing season from December 1 to March 31, approximately 268 tons of Hokki-gai land at Misawa Fishing Port, making it one of the largest producers in Japan.

The clams are caught using a tool called keta-net in the sandy area along the coast from Hachinohe City to Misawa City. Because surf clams live in the sand, the keta-net, which has a bag net attached to a fishing tool with claws, are pulled to scrape the seafloor.

The most common type of keta-net has a hydraulic pump, in which water is pumped through the sand to dig the clams out of the sand so as not to damage them.

*The total catch yield is based on the data from the 2021 Misawa City Statistics/Quantity and Value of Catch by Fish Type Report. 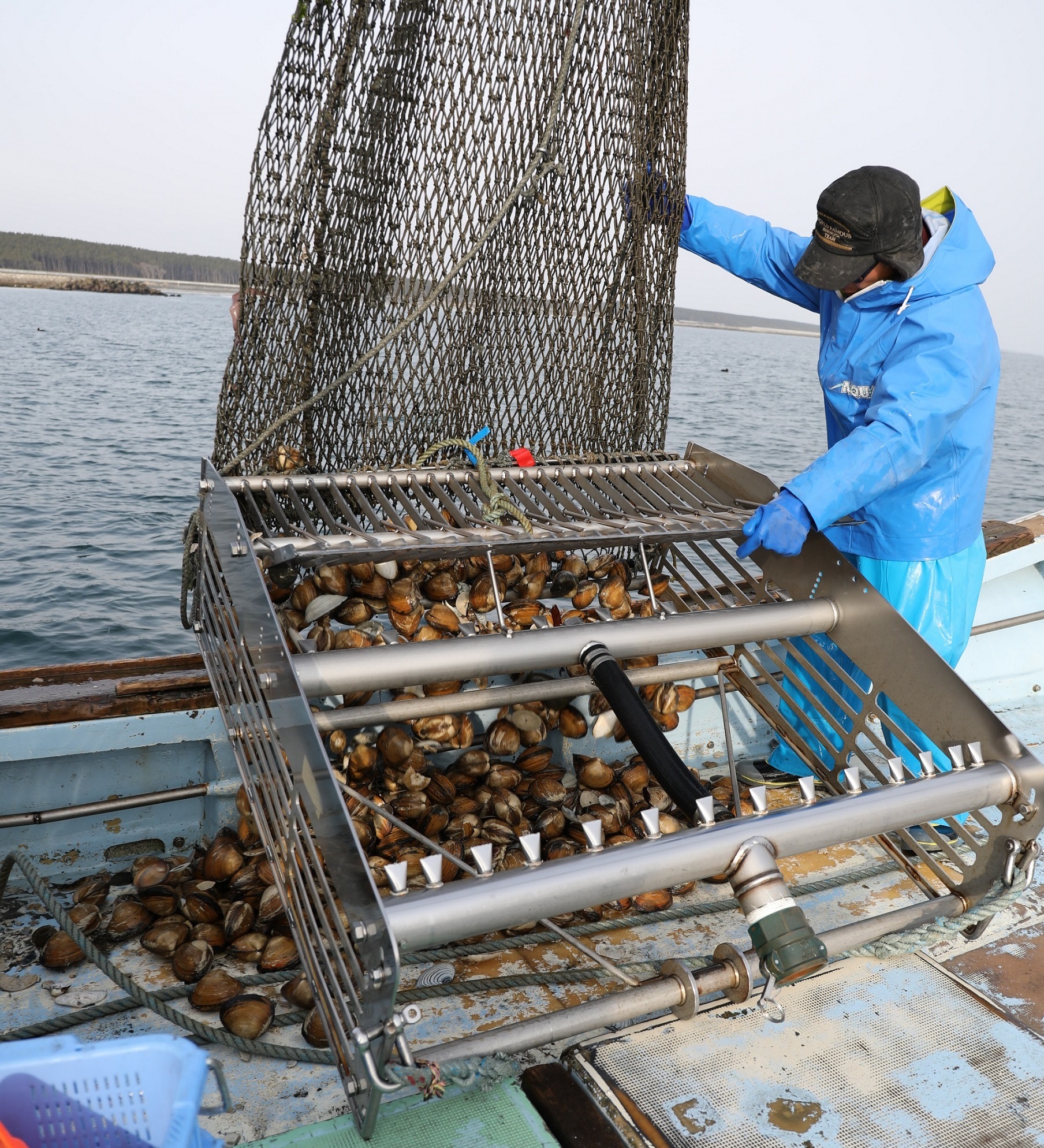 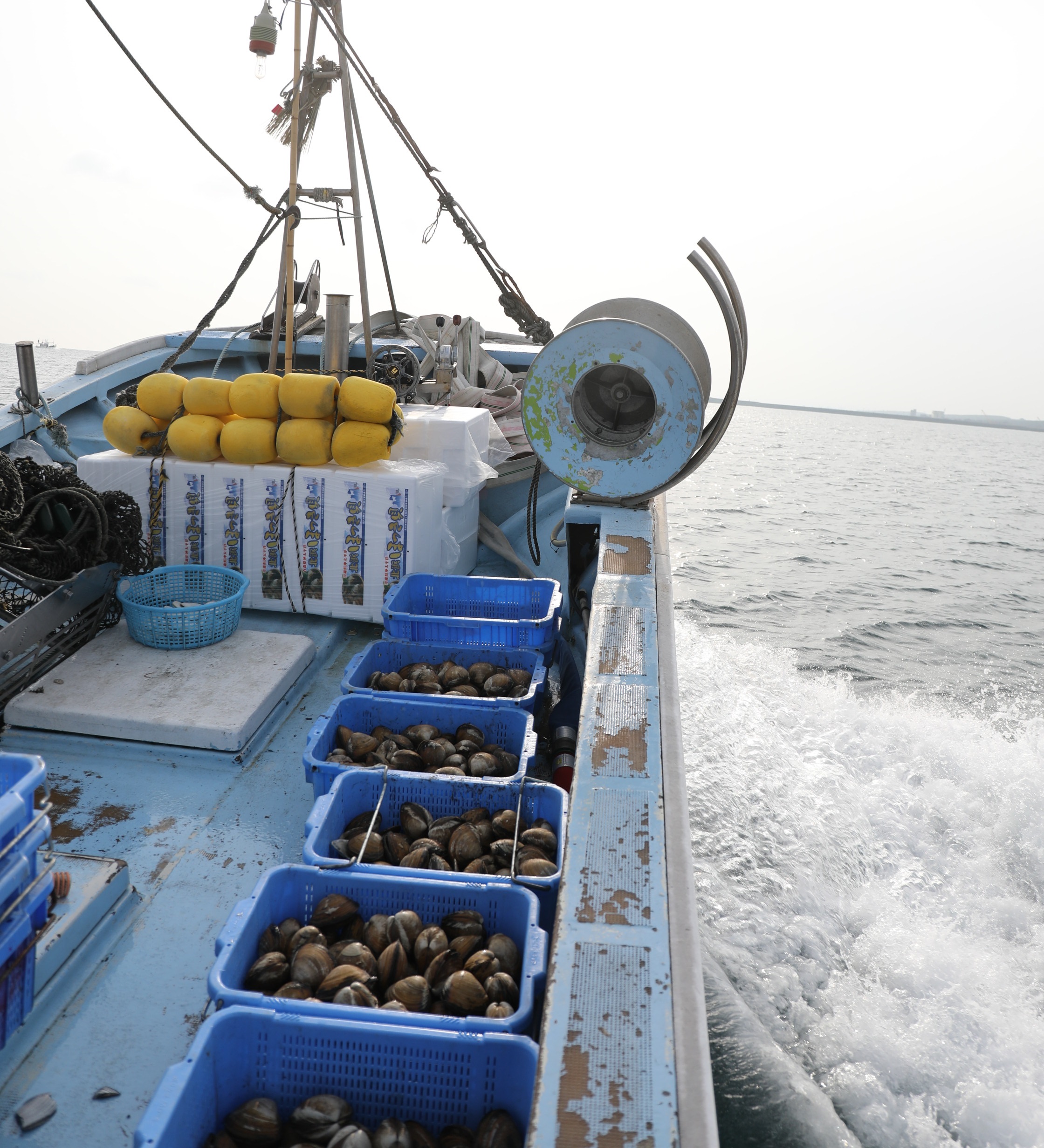 Hokki-gai can be found north of Hokuriku on the Sea of Japan side. On the Pacific side, they live in the cold waters from the coast north of the Kanto region to Siberia.

They prefer sandy seafloor about 10-meter deep where there is a tide current that is not near estuaries. The clams move through the sand and extend their water tubes to suck in plankton and other marine organisms that are suspended in the sea as a food source along with the seawater. 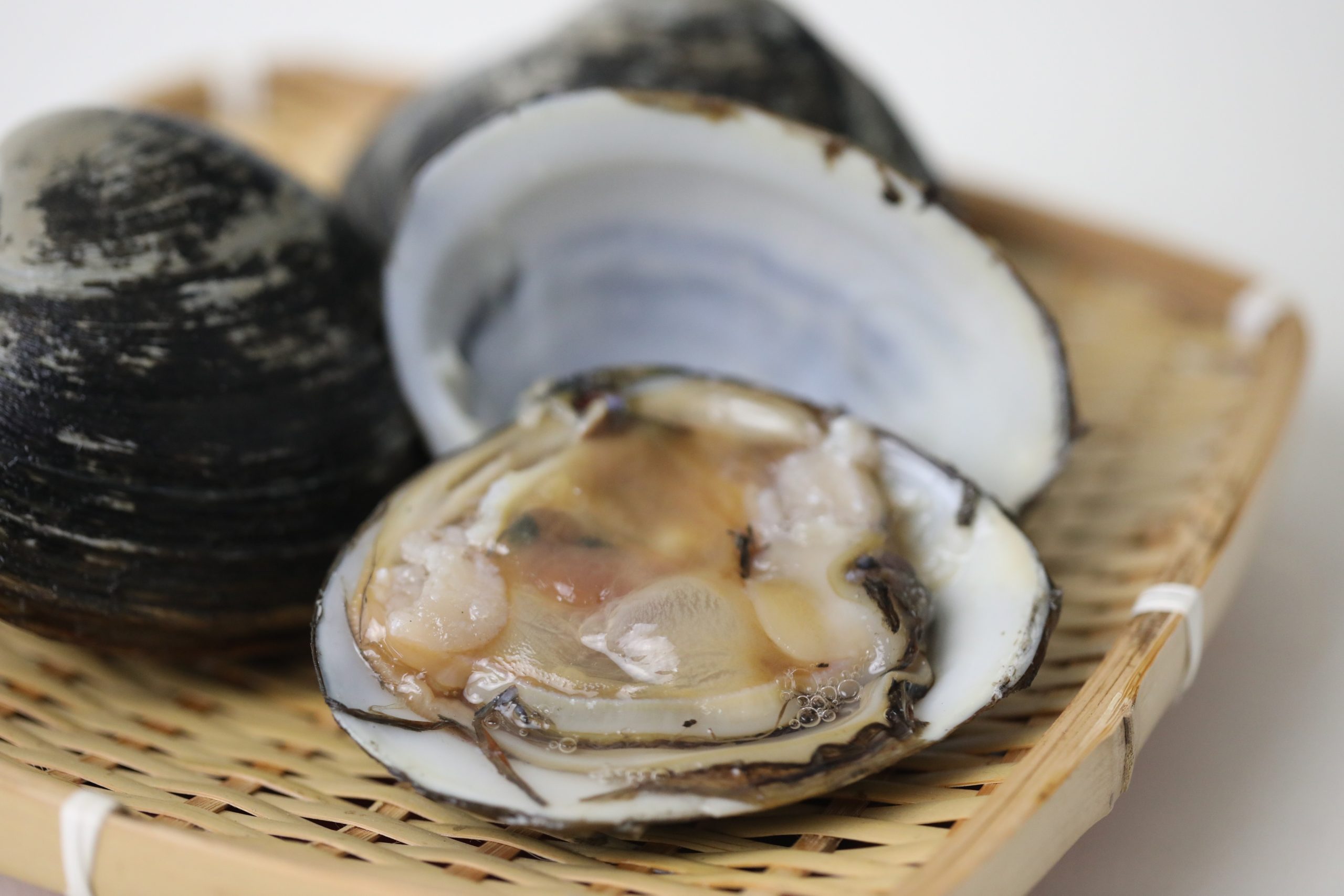 Hokki-gai grow about 1 cm in size per year and can live as long as 30 years. Thanks to their thick shell, they can live on for about one week even after being removed from seawater, making them one of the most vigorous clam species.

Eggs are laid around June and July. They float in seawater for 20 to 30 days before settling on the sandy seafloor, growing to several millimeters in size by the following spring. The clams reach maturity in about 3 to 4 years, and then enter spawning season.

During the early summer of the spawning season, it is known that the hokki-gai lose weight as they expend energy in preparation for spawning. As a result, winter and early spring are said to be the best season to catch hokki-gai, when they are at their peak with nutrition before spawning.

Because of their thick, firm shells, hokki-gai are difficult to open when their mouths are closed. Once you get the hang of opening them, however, they are easy to enjoy as you can eat their strap meat, mantle, and the adductor muscles. It is the king of winter clams.

Fresh hokki-gai is best enjoyed as sashimi. But, when cooked, its sweetness is enhanced, making it a versatile ingredient that can be used in various recipes. Stir-frying with butter enhances its milky sweetness and richness. The mantle and the adductor muscles make great broth and it makes delicious Japanese mixed rice.

Hokki-gai is low in fat, high in protein, and rich in nutrients such as iron and vitamin B12. 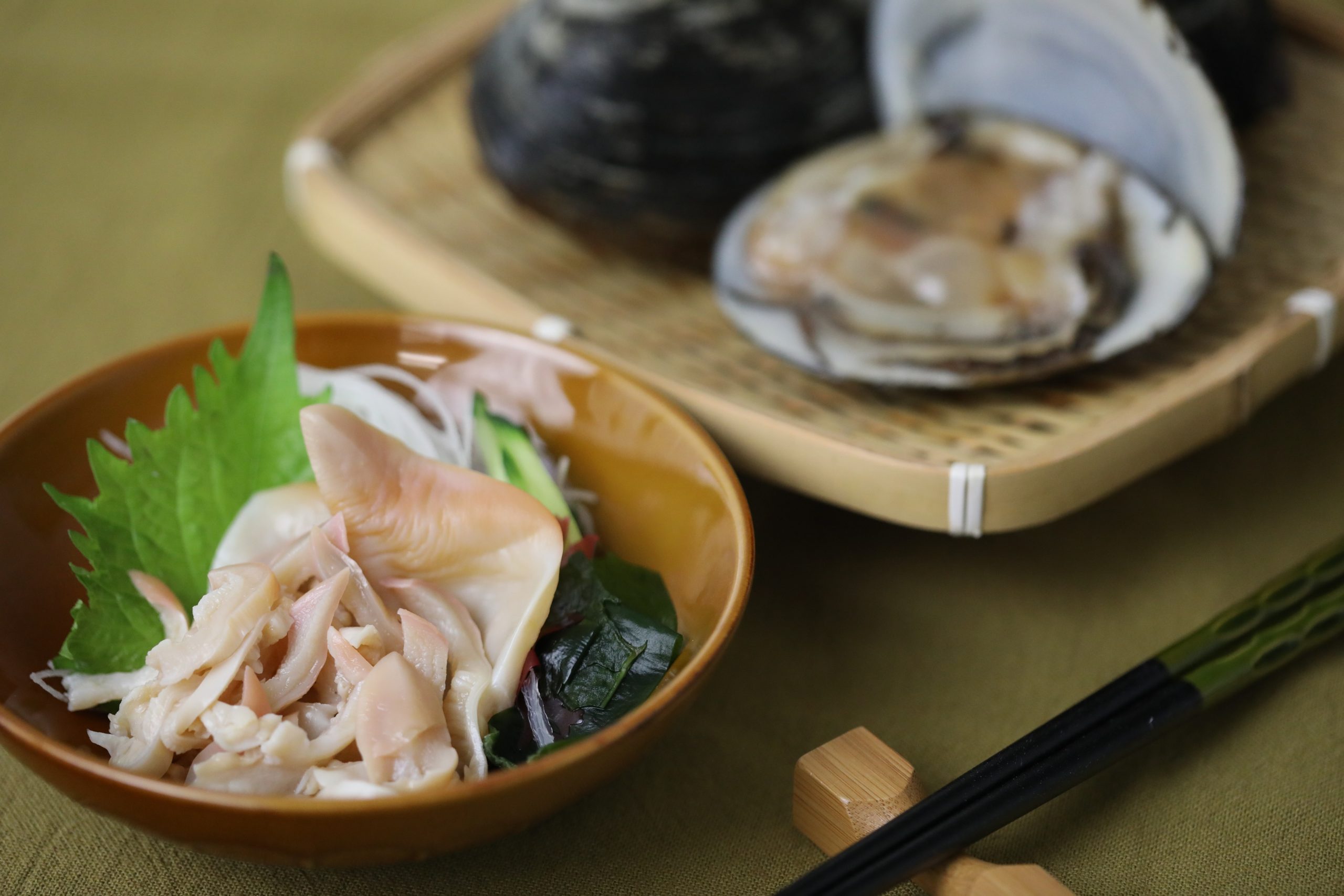 In the early 1980s, the yield of hokki-gai saw a drop, dipping below 100 tons. The Kitahama Waters Hokkigai Sustainability Council, organized by four fishery cooperatives in the Kitahama area (Hachinohe Minato, Ichikawa, Momoishi, and Misawa), has since been managing the resource by agreeing on limited fishing seasons, limited fishing hours, and daily catch restrictions.